This week Channel 2 in Houston ran a story about Quilty, a 6-year-old cat at the Friends For Life Animal Rescue and Adoption Shelter who would not be contained. 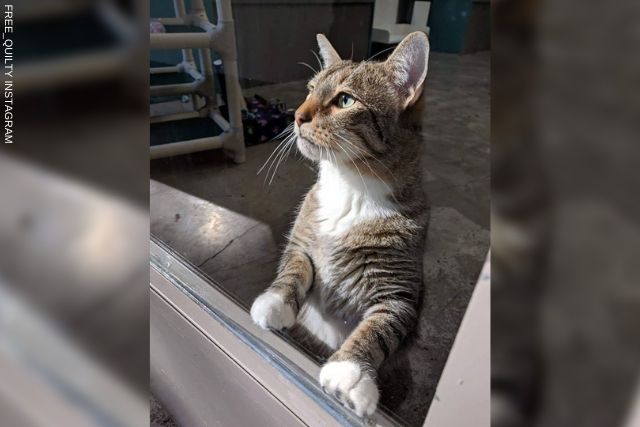 This week Channel 2 in Houston ran a story about Quilty, a 6-year-old cat at the Friends For Life Animal Rescue and Adoption Shelter who would not be contained. Quilty refused to be held in captivity. But not only that, he would free other cats in the shelter as well.

“He has gotten out quite a few times,” said shelter employee Beth Brown. “The last straw on the camel’s back was the day he let them out three times in a row, in the middle of the afternoon, with us watching him.”

Brown said the first escape happened while the shelter was closed for the night. Employees returned to the shelter one morning to find 12 cats running amok.

“One cat had peed on the mouse pad,” Brown said. “One cat had pooped in the donation bin. Things were on the floor.”

Surveillance video around the shelter gave employees an idea of who was the culprit. Cameras never caught Quilty with dirty paws, but video did show him as the first cat to leave the senior cat room. So, shelter workers tried locking Quilty up in his own kennel. He escaped. They tried several other methods, but each time the crafty cat outsmarted everyone.

So how did Quilty do it? Shelter workers suspect he would jump on the door handle and let himself and his fellow felines out. Quilty’s escapes have garnered him a tremendous social media following and, hopefully, a new home! He is currently on a trial “sleepover” at a potential new residence. If he doesn’t escape there as well.

As I read this story, I couldn’t help but love Quilty. Because more than many Christians, Quilty understands the mission of the church. Jesus said that He had come for the same reason.

“The Spirit of the Lord is on me, because he has anointed me to proclaim good news to the poor. He has sent me to proclaim freedom for the prisoners and recovery of sight for the blind, to set the oppressed free, to proclaim the year of the Lord’s favor.”

Freedom for prisoners and setting the captives free. Sounds like Quilty has got it right!

“Through him everyone who believes is set free from every sin,” Acts 13:39

Too often we sit contentedly in our cages and allow others to sit contentedly in theirs, when the Spirit of the Lord has called us to freedom.  We get bogged down in what kind of study we should be doing, what kind of worship we should be having or whether or not this person or that person is “correct.” But the truth is we need to be more like Quilty. We need to be about setting captives free. We need to be about proclaiming the year of the Lord’s favor and sharing our glorious freedom with a captive world. Into the Storm Part 2 Into the Storm Part 1